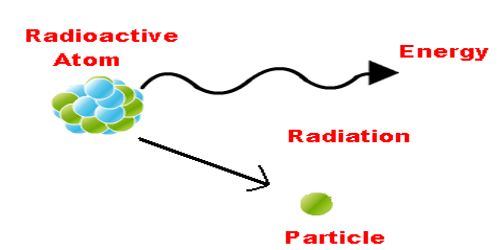 Radioactivity is a spontaneous disruptive process. The elements which have atomic masses more than 206, this process occurs in them. In 1896, famous French scientist Henry Becquerel first discovered radioactivity. He observed that uranium and their compounds emit spontaneously mysterious particles and rays. Then Pierre Curie and his wife Madam Curie observed the similar characteristics in Thorium. Later on, these characteristics were also found in heavy elements like radium, polonium, and actinium etc. The process of spontaneous emission of particles and rays from a substance is called radioactivity and the substance from which these particles and rays are emitted are called respectively the radioactive substance and radioactive rays. Radioactivity is a nuclear phenomenon. Radioactivity refers to the particles which are emitted from nuclei as a result of nuclear instability. It is, in essence, an attribute of individual atomic nuclei. In unstable nuclei, the strong nuclear forces do not generate enough binding energy to hold the nucleus together permanently. These radiations are termed radioactive rays. Generally, these radiations consist of some particles like alpha and beta particle in some time charge fewer gamma rays emitted.

The following characteristics are observed for radioactivity: