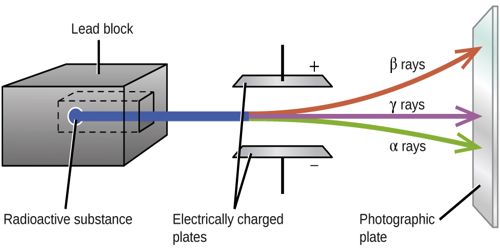 The existence of three types of rays was proved by Madam Curie from the following experiment. 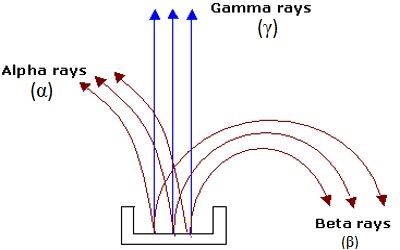 She took a thick lead block [Figure]. By drilling a long narrow slit in the lead block, she placed a small piece of radium within it. A photographic plate was placed horizontally at a small distance from the slit of the block so that the radioactive rays were incident on it. The whole arrangement was enclosed within an air-tight chamber and the chamber was evacuated by an air pump. An intense magnetic field was applied perpendicular to the emitted rays. On the photographic plate, three different clear traces or lines were obtained one on the left, one on the right and the other one just at the middle.

We know, when a magnetic field is applied on moving charged particles the particles are deflected. If the direction of the applied magnetic field is normal but down on the plane of the paper, then according to the right-hand rule-1, the rays or particles deflected left side of the central initial direction of motion are positively charged. These are α-rays. The rays or particles deflected right side of the undeviated rays are negatively charged. These rays are β-rays. The middle undeviated rays which have not been deflected by the magnetic field are chargeless. These rays are γ-rays; γ-rays are electromagnetic waves. The only difference of γ-rays with ordinary light is in their wave-length, γ-rays are of electromagnetic waves having extremely small wavelengths.

Mean Life or average life of a Radioactive Element