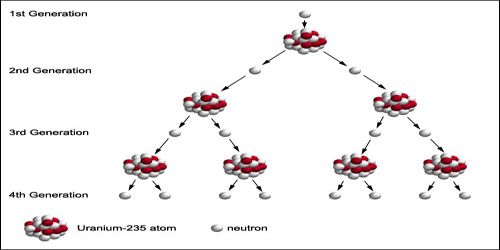 The chain reaction is such a process which once started the reaction continues without requiring further energy and a tremendous amount of energy is released because of the fission of all nuclei. It is a self-sustaining reaction in which the fission of nuclei of one generation of nuclei produces particles that cause the fission of at least an equal number of nuclei of the succeeding generation. It is a procedure in which a neutron colliding with an atomic nucleus causes fission and the ejection of one or more other neutrons, which induce other nuclei to split. 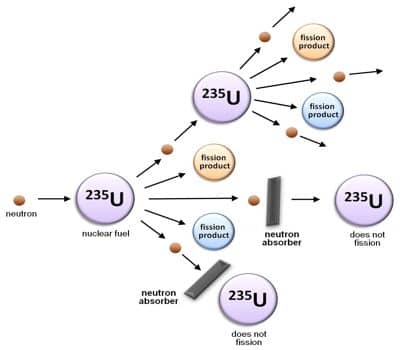 Explanation: We find that when a 235U92 nucleus is bombarded by a thermal neutron two nuclei will be formed because of fission and along with them three more neutrons are produced. These three neutrons will bombard another three uranium nuclei and fission will take place in those nuclei. As a result, 9 neutrons will be generated [figure]. These nine neutrons will react with nine more uranium nuclei and due to fission 27 neutrons will be produced and the fission process will continue until all the nuclei are exhausted. This process is called the chain reaction. In an uncontrolled chain reaction in one-millionth part of a second fission reaction can increase thousand times. Of course, in each fission reaction, a tremendous amount of energy is released.