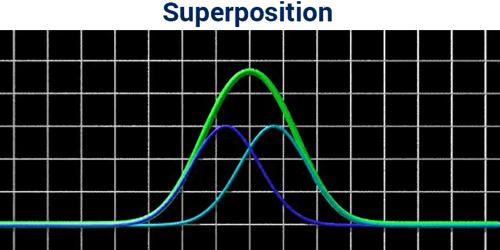 Law: – When two or more waves pass simultaneously through the same medium, the resultant displacement of each particle of the medium at any instant is equal to the vector sum of the displacements produced by the waves separately. This principle is known as the principle of superposition of wave.

Suppose, two waves are travelling simultaneously through a medium. If the displacement of a particle for the first wave is y1 and displacement at that particle is y2, then according to this law, the resultant displacement will be,

If the two displacements travel along a straight line in the same direction, then “+ ve” sign is used and if these wave move in opposite direction along the straight line, then “- ve” sign is to be used. Observe the following applications of superposition principle:

(i) From our everyday experience, we can realize that different waves travelling through a particular medium can travel independently. If two stones are thrown on the water surface, two circular waves that are generated can travel through each other with equal and unchanged speed, shape and velocity. When two or three persons talk at a time we understand their voice clearly and unchanged. When taking photographs light waves coming from different objects when entering through the shutter of a camera, they do not interfere with each other: consequently, we get the distinct picture of each object.

(ii) When water waves (ripples), sound waves etc. travel through inertia media and if in those cases the amplitude of the superposed waves is less only then this law is applicable. But in case of the light wave or any other electro-magnetic waves, this law is not properly applied.

(iii) The principle of superposition is a general law. Whatever may be the frequencies or direction of the waves this law is always applicable for their superposition. But our discussion will remain concentrated for the wave having equal or nearly equal frequencies.