Home Physics Mirror and its Types 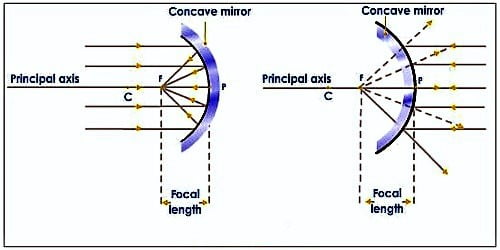 A mirror is a smooth surface on which regular reflection takes place. A clear image of an object placed in front of a mirror is formed due to the reflection of light. A flat and well-polished reflecting surface area is a mirror. When a mirror reflects light, it forms an image. An image is a copy of an object that is formed by reflection or refraction.

Plane mirror: If the reflecting surface is a plain and smooth and regular reflection of light takes place on it, then this surface is called a plane mirror. It has a smooth reflective surface and forms only virtual images. The image formed by a plane mirror is also right-side up and life-sized. This is the most general type of mirror used in bedrooms and bathrooms. The mirror which we usually use is a plane mirror.

These are: 1. Concave mirror 2. Convex mirror

A concave mirror is also known as the converging mirror as in these type of mirrors light rays converge at a point after they strike and are getting reflecting back from the reflecting surface of the mirror. They form the illusion of largeness and are typically found in bathrooms and bedrooms.

Convex mirror: If the convex surface of a sphere acts as the reflector, that is if the regular reflection of light takes place from the convex surface of the spherical mirror, then it is called a convex mirror. These mirrors are “always” form virtual, erect and diminished regardless of the distance between the object and mirror. In this case, a convex mirror is made by silvering on the concave or inner surface of the part of the sphere [Figure 1]. The convex mirror is a diverging mirror since the parallel beam of light diverges from a point or spreads over and never meets at a point after reflection [Figure 2]. However, unlike concave mirrors, they bulge out and distort the reflected image, making it smaller.