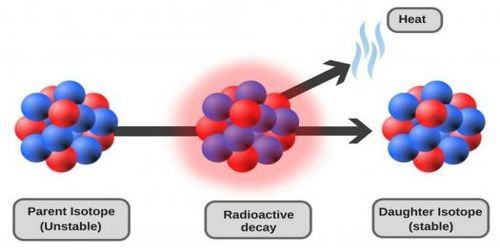 If the rate of radioactive disintegration of atoms is dN/dt and if N is the number of unchanged atoms at time t, then – – dN/dt ∞ N or, – dN/dt = constant x N.

Here λ is the radioactive decay constant. Since the number of atoms of radioactive substance decreases, hence a negative sign has been used in the equation. 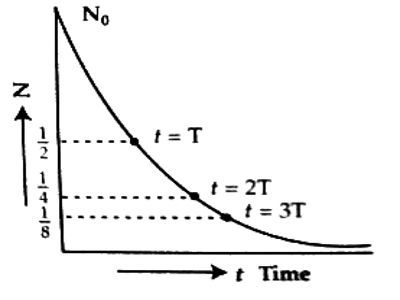 Integrating the equation (1) we get,

Here C is the constant of integration. Its value is to be determined.

This is the law of radioactive decay or disintegration.

This law obeys the exponential law [Figure). Its graph i.e., the graph of time (t) versus unchanged atoms N is shown in the adjoining figure.

From the figure, it is seen that at the start i.e., t = 0, if there is a fixed amount of radioactive atoms then after T its amount decreases by half and after 2T time that residue amount becomes half again. i.e., then it will be ¼ part of the original amount.

From N – t curve it is proved that for total disintegration of a radioactive material it takes infinite time.

That means decay constant indicates the probability of decay of an atom in unit time.

Definition: The probability of disintegration or decay of an atom of a radioactive substance in unit time is called the decay constant or disintegration constant.

What is giant resonance?