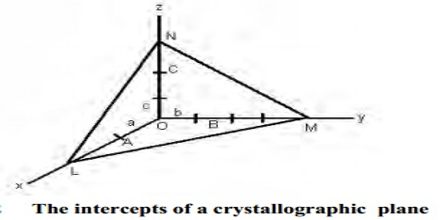 The reciprocal of these lengths will then be a/OA, b/OB and c/OC. A consequence of the law of rational indices is that reciprocal intercepts of crystal faces are small whole numbers. Thus if h, k, l are small integers then;

The reciprocal numbers, hkl at are known as the Miller indices. If a face is parallel to any one axis, that is, the length of the intercept is α, the Miller index is reciprocal of α, i.e., 0. The notation is also applicable to planes drawn within the crystal. It is clear that for the standard plane, i.e., the plane which makes intercepts of length a, b and c on the axis, the value of h, k and l are unity. It is often described as a (111) plane. If the intercept of any plane has a negative value it is represented by placing a bar over the Miller index. For example, (111) plane represents a plane which cuts the OZ axis at a distance of – c. The use of the Miller indices may be illustrated with the help of Figure A3 for cubic crystals. 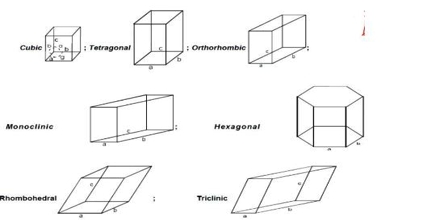 The property which determines to which system a crystal belongs is symmetry. Once a suitable set of axes has been fixed for a given crystal the crystal planes can be described.