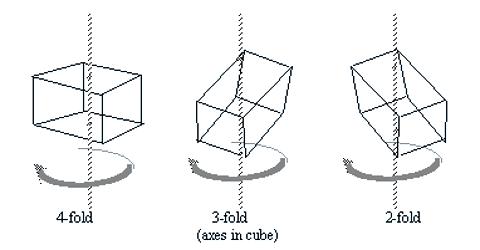 Symmetry is an important property of crystals. Symmetry in crystals indicates the various ways in which the crystal may be rotated, reflected in a plane or inverted through a point without changing its appearance. Crystals may have;

These are called the elements of symmetry.

(i) Plane of symmetry: When a crystal can be divided by an imaginary plane into two equal parts, each of which is a mirror image of the other, the crystal is said to have a plane of symmetry. A cube has several planes of symmetry, namely those perpendiculars to the faces of the cube and those bisecting the angles of the upper and Lauer faces.

(iii) Centre of symmetry: It is a point at the centre of a crystal. A crystal is said to have a centre of symmetry when any line drawn through this point will intersect the opposite and identical faces, edges or corners of the crystal at equal distances. 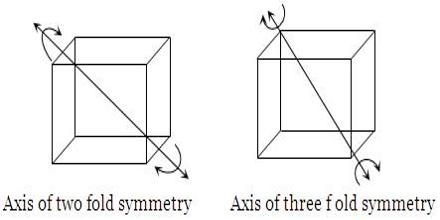