Oxygen is the main by-product of photosynthesis. It is involved in the oxidation of carbohydrates with the release of energy, carbon dioxide, and water. The cycling of oxygen is a highly complex process. Oxygen is constantly being used and created by different processes on planet Earth. All of these processes together make up the oxygen cycle. The oxygen cycle is interconnected with the carbon cycle. 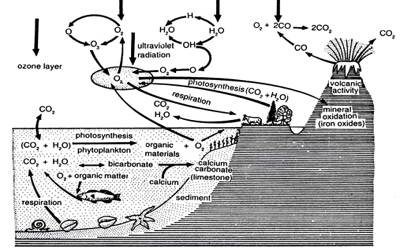 Oxygen occurs in a number of chemical forms and combinations. It combines with nitrogen to form nitrates and with many other minerals and elements to form various oxides such as the iron oxide, aluminum oxide, and others. Much of oxygen is produced from the decomposition of water molecules by sunlight during photosynthesis and is released into the atmosphere through transpiration and respiration processes of plants.

The oxygen cycle elaborates how oxygen circulates in various forms through nature. Oxygen occurs liberally in the air, trapped in the earth crust as chemical compounds, or dissolved in water. Oxygen in the atmosphere is about 21%, and it is the second most abundant gas after nitrogen. It is typically utilized by living organisms, particularly man and animals in respiration. Oxygen is also the most common element of the human body.