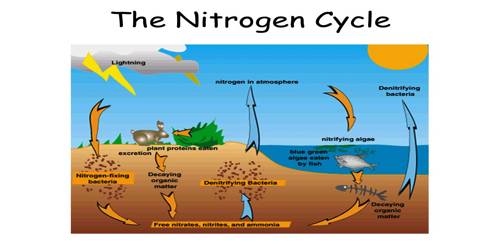 Nitrogen is a major constituent of the atmosphere comprising about seventy-nine percent of the atmospheric gases. It is also an essential constituent of different organic compounds such as the amino acids, nucleic acids, proteins, vitamins, and pigments. Only a few types of organisms like certain species of soil bacteria and blue-green algae are capable of utilizing it directly in its gaseous form. Generally, nitrogen is usable only after it is fixed. Ninety percent of fixed nitrogen is biological. The principal source of free nitrogen is the action of soil micro-organisms and associated plant roots on atmospheric nitrogen found in pore spaces of the soil.

Nitrogen can also be fixed in the atmosphere by lightning and cosmic radiation. In the oceans, some marine animals can fix it. After atmospheric nitrogen has been fixed into an available form, green plants can assimilate it Herbivorous animals feeding on plants, in turn, consume some of it Dead plants and animals, excretion of nitrogenous wastes are converted into nitrites by the action of bacteria present in the soil. Some bacteria can even convert nitrites into nitrates that can be used again by green plants. There are still other types of bacteria capable of converting nitrates into free nitrogen, a process known as denitrification (Figure).