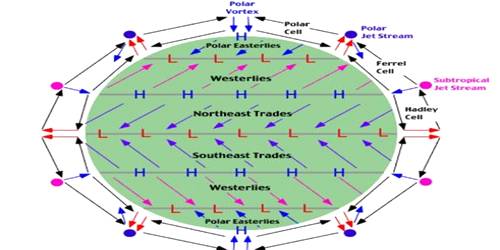 The velocity and direction of the wind are the net results of the wind generating forces. The wind blows because of differences in air pressure from one location to another. The wind blows from areas of high pressure toward areas of low pressure. The winds in the upper atmosphere, 2 – 3 km above the surface, are free from the frictional effect of the surface and are controlled by the pressure gradient and the Coriolis force. When isobars are straight and when there is no friction, the pressure gradient force is balanced by the Coriolis force and the resultant wind blows parallel to the isobar. This wind is known as the geostrophic wind (Figure). 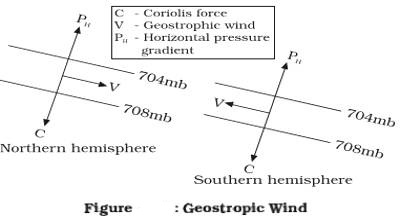 The wind circulation at the earth’s surface around low and high on many occasions is closely related to the wind circulation at a higher level. Generally, over the low-pressure area, the air will converge and rise. Over high-pressure area, the air will subside from above and diverge at the surface (Figure). Apart from convergence, some eddies, convection currents, orographic uplift, and uplift along fronts cause the rising of air, which is essential for the formation of clouds and precipitation. 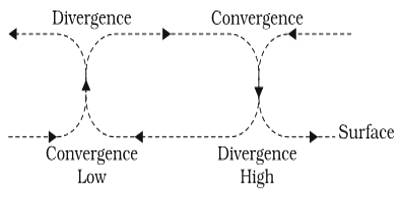 Which factors are determining the Climate of India?