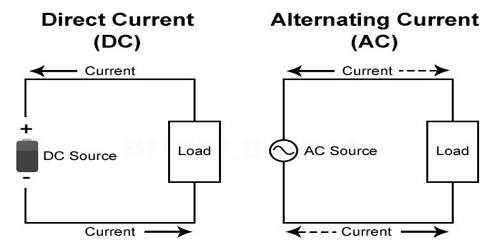 Explanation on Generation of alternating current

There is a source of current from which the flow of current in the circuit changes direction spontaneously at a regular interval. This current is called alternating current. Alternating current describes the flow of charge that changes direction periodically. As a result, the voltage level also reverses along with the current. AC is used to deliver power to houses, office buildings, etc.

Suppose N and S are two poles of a magnet which creates a uniform magnetic field intensity of H [Figure]. Let AB be a closed loop. It is situated perpendicular to the magnetic field. The loop is rotating about its own horizontal axis with an angular velocity of ω. 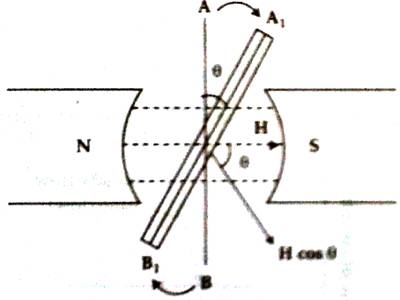 Suppose the loop contains n number of turns and its area is A. So, if the plane of the loop is normal to the field lines, then the magnetic flux passing through it is,

Now let us consider that the coil in time ‘t’ reaches to a position A1B2 after rotating an angle θ. Then the horizontal components of the field intensity = H cos θ.

So, magnetic flux or number of field crossing the coil,

Since due to the rotation of the coil the magnetic flux passing through the coil will change, so as a result of Faraday’s electromagnetic induction electromotive force will be induced in the coil and its value is.

Equation (1) is called a sinusoidal equation. In case of current above equation can be written as, I = I0 sin ωt. In this way’ we get alternating current.