Home Physics What is Electric Motor?

Suppose a loop or coil of wire like the picture (a) is used between the two poles of a magnet. As the loop has returned to the opposite direction from A to B, the opposite electricity will flow between the two half of the loop or coil. So, the wire will go to the upward in A and downward in B. For this, the wire moves in clockwise. At the vertical position of the wire like figure (b) no force will act on it. For this, it will be stopped. To keep the coil rotating, we will use a device named commutator. It consists of two equal segments made of copper.

Each segment is connected to A and B respectively. The outer part of the separated segment makes a contact with the electric source through carbon brush. The segment moves with the coil and when its’ gap between two side remains opposite to the carbon brush, no current will flow. But despite this fact, the movement will remain to continue for its inertia and it will get force newly when it will come to the contact of the moving brush. Thus the rotation will remain to continue.

It is noticeable that though A and B have changed their position, the commutator current will enter from the right side of the loop like before and will come out from the left, (see below figure) and the coil will rotate clockwise. This is the principle of the electric motor. Electric motor converted the electric energy into mechanical energy. To increase the speed and power of it, the intensity of the magnetic field will have to increase. 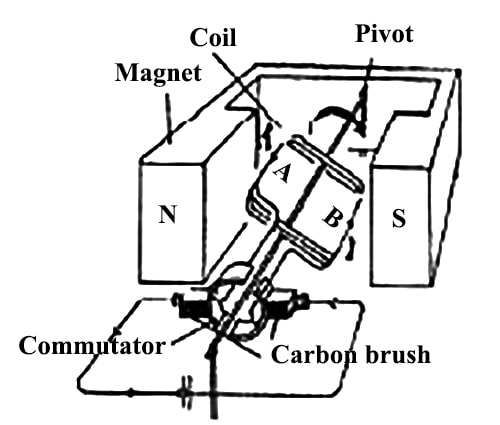 The intensity of the of the magnetic field can be increased in many ways. These are –

-By increasing the electric current.

-By increasing the number of turn in the loop or coil.

-By using the powerful magnet.

-By increasing length and width of the coil.