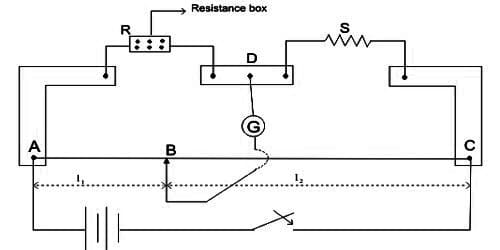 Experiment: To determine the unknown resistance by a Post Office Box

Theory: By inserting appropriate resistance in the post office box current passing through the galvanometer can be made zero. If the potentials between points B and D are equal i.e., there is no potential difference between the two terminals of a galvanometer, then this phenomenon happens. In this situation, no deflection is found in the galvanometer and the bridge remains in the equilibrium condition. Now according to Wheatstone bridge balanced condition,

By this instrument, the value of unknown resistance can be determined up to the second digit after the decimal. Here R = resistance of the 3rd arm.

Description of the instrument

Normally, with the help of this instrument, we can measure both low and high resistances. It is composed of some fixed value resistance coils. Coils are arranged in succession and form three arms of the Wheatstone bridge. The experimental unknown resistance S is the fourth arm of the bridge. Like the resistance box, here also coils are in a box. On the top platform of the box, two ends of each coil are connected by solid brass blocks. Brass blocks an arranged in adjacent three rows. Between two successive blocks, there is an arrow-shaped gap. If the plug of the gap is withdrawn fixed resistance is included in the circuit. 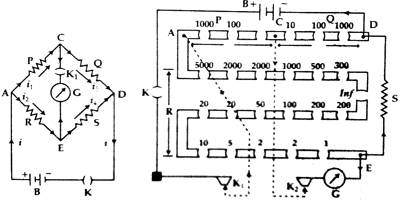 (1) By rubbing the ends of connecting wires and contact points thoroughly connection is made tightly according to the figure.

(iv) Now in arm P instead of 10 ohms, 100-ohm resistances are inserted. As before the resistance of the second arm, Q is kept at 10 ohms. So Q/P ratio will be 1/10, hence in balanced condition R = 10 S. Now as before resistance plugs from the third arm R are withdrawn so that galvanometer deflection becomes zero. In this situation, unknown resistance S = R/10.

What is Parallel Circuit?