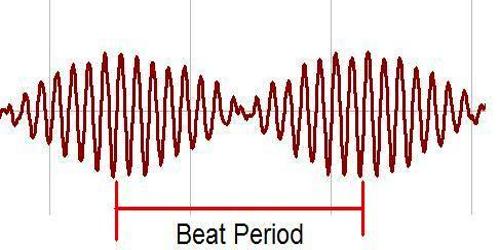 When two sound waves of equal or nearly equal intensity and nearly equal frequencies originate at the same time and travel along the same direction, the loudness of the resulting sound is not uniform; rather it rises and falls at a particular interval of time. These periodic variations of loudness are called beats. The number of beats is determined by the number of periodic increase or decrease in intensity of sound per second. 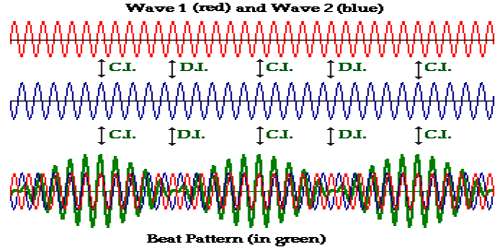 When two progressive waves with slightly different frequencies and of equal or nearly equal intensities travel in a medium along the same direction superpose on each other, the intensity of the resulting sound rises and falls regularly with time. These periodic variations in the intensity of sound are called beats. It occurs when two waves of nearby frequencies overlap and create a new resultant wave. We will need two tuning forks of close frequencies e.g. 700 Hz and 705 Hz.

In our case we have frequency A as 700 Hz, frequency B as 705 Hz therefore if these two frequencies interfere in time, the resultant beat frequency will be of 705-700 Hz = 5 Hz.

This way we can find out the dissimilarity in two close frequencies by listening to their beats, the closer the two frequencies are the smaller the resultant frequency would be. Eventually, the beats would disappear.