For a satellite to appear fixed at a position above a certain place on the Earth, its orbital period around the Earth must be exactly equal to the rotational period of the Earth about its axis.

The speed of the satellite in its orbit is:

The gravitational force on the satellite due to the earth is: F = GMm/r2 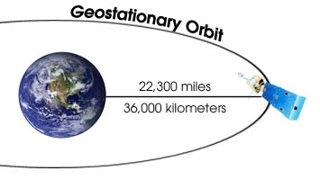 If a satellite is parked at this height, it appears to be stationary. Three satellites spaced at 120° intervals each above Atlantic. Pacific and Indian oceans provide a worldwide communication network

Newton’s Law of Gravitation in Dynamics

What is Gravitational Mass?

Applications of Newton’s Laws of Motion: Exploration in the Space