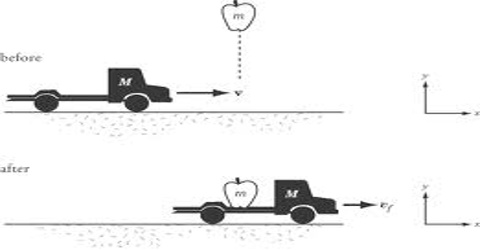 Experimental procedure: Exercise the following experiments to verify the conservation principle of momentum.

Experiment- 1: Take two toy cars A and B. Let their masses be m1 = m2 = m. Keeping a compressed spring in the middle tie strongly the two cars by a thread [Fig (a)]. Now burn the thread with a match stick. 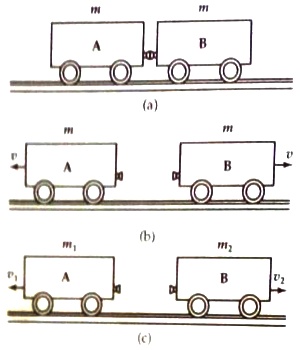 Put two marks on the rail behind two cars by a chalk. A new measure by a stop watch the time for each car to cross the two marks. In this case, divide the distance by time to determine the velocity of the car. This experiment follows the conservation principle of momentum. At first, the two cars were at rest, total momentum was zero. Since the two cars move opposite to each other, so if the velocity of one car is taken as positive then the velocity of the other car will be negative.

Experiment- 2: You can do this experiment by taking seven or eight billiard balls of equal mass. Keep all these balls in series touching each other on a smooth table in a straight line (Fig 2). If you strike the series by a rolling ball you will see that a ball from the other end of the series rolls ahead with same velocity.