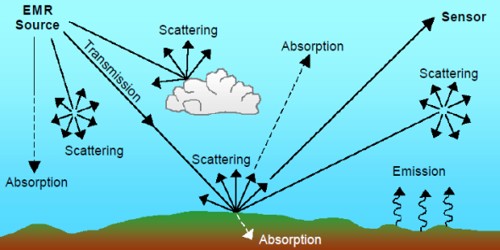 When light progresses through a medium, then electrons of the material absorb that radiation. So, due to absorption of energy, those electrons execute new simple harmonic oscillation and by collisions between molecules or radiating again energy releases. Hence electrons having simple harmonic motion radiate absorbed radiation into space. This process is called scattering of radiation. Scattering occurs when light or other energy waves pass through a defective medium and are deflected from a direct path. An example is when the sun’s rays pass through clouds. The light is deflected off of its straight path and scatters in many directions. Scattering of Radiation is the distraction of radiation from its original path as a consequence of interaction or collisions with atoms, molecules, or bigger particles in the atmosphere or other media between the source of the radiation (e.g., a nuclear explosion) and a point at some distance away. As a result of scattering, radiation (particularly gamma rays and neutrons) will be received at such a point from many directions instead of only from the direction of the source.