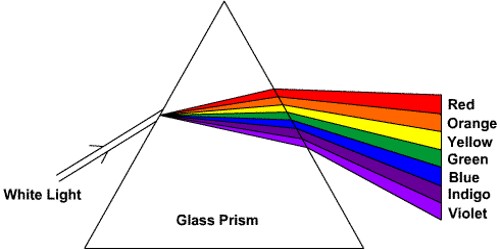 From ancient times people knew that when light passes through a diamond, valuable stones, and crystals etc different bright colors are produced. Depending on the ability to create different bright colors the values of stones are fixed. But people did not know why bright lights are produced by these materials when ordinary light enters through them. In 1666 famous scientist Sir Isaac Newton proved experimentally that white light is of compound nature. 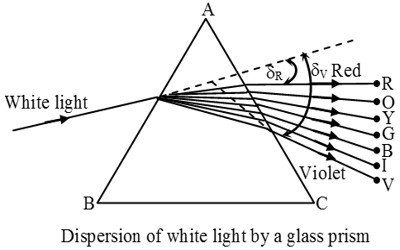 What is the reason for dispersion of white rays of the sun in seven different colors while traveling through a prism? Why also the rays bend towards the prism? It is known that velocities of different colors of light become different when they pass through a dispersive medium like glass. The velocity of red light is maximum and the velocity of violet light is minimum. Due to the variation of the velocities, the time taken to cross the width of the prams by red, blue etc light rays becomes different and separated from each other. Since in vacuum or in air velocities of different light rays are same, hence white rays do not get dispersed while traveling through vacuum or air. The phenomenon of splitting a ray of white light into seven colors is called dispersion. If the emergent rays from the prism are seen on a screen, they form a beautiful band of seven colors. This colored band is called spectrum. So, following definition can be given for dispersion and spectrum.

Definition: The phenomenon of splitting a ray of white light into seven fundamental colors while refracting through a prism is called dispersion.

Ordinarily, it can be said that splitting of compound light into its constituents is called dispersion. The distribution of these fundamental colors due to dispersion is called spectrum.