Home Physics Law of Reflection in terms of Fermat’s Principle 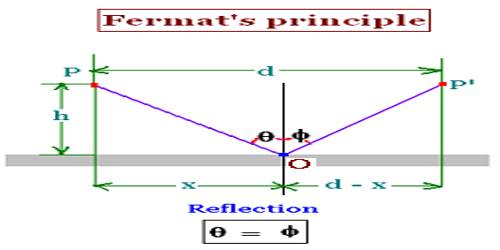 Suppose MS is a plane reflector, PO and OQ are incident and reflected rays [Figure]. According to Fermat’s principle, the distance POQ is the shortest distance between P and Q. Now normally PM = h1 and QS = h2 are respectively drawn from Points P and Q on the reflector MS. Let OM = x and MS = l, then OS = (l – x). Here if Initial and final points P and Q are stationary then the distance x between points O and M are only variable. 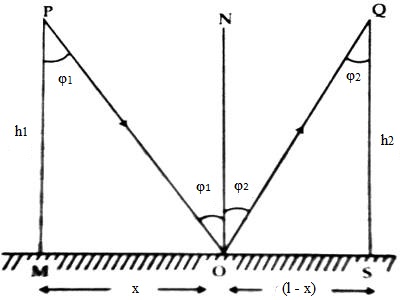 A light ray incident upon a reflective surface will be reflected at an angle equal to the incident angle. Both angles are typically measured with respect to the normal to the surface. This law of reflection can be derived from Fermat’s principle.

According to Fermat’s principle light ray coming from point P after reflection a point O, the path is along which it reaches to Q will be maximum or minimum. That means,

That means, angle of incidence, ∠PON = angle of reflection, ∠OQN.

So, an angle of incidence = angle of reflection.

This is the second law of reflection.

This is the first law of reflection.