Home Chemistry The Viscosity of Liquids 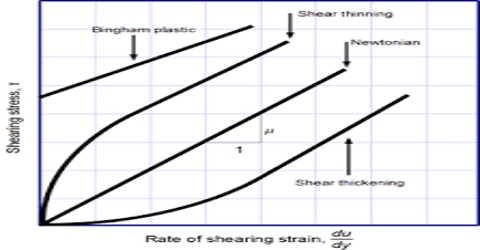 Liquids flow when placed in an inclined surface or a tube. Some liquids flow more readily than others. Those that flow slowly, namely coal-tar, lubricating oil, glycerin etc., are said to be viscous. On the other hand, those which flow easily, namely water, kerosene oil, benzene etc. are said to be liquids of low viscosity. In general, it may he stated that liquids possess a certain resistance to flow. Viscosity is a measure of this resistance to flow. 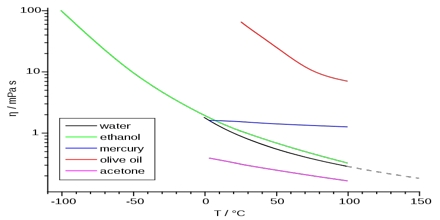 Viscosity is really a frictional effect experienced by one layer of a liquid in moving past another in much the same way as an object experiences frictional resistance when dragged an a surface. The frictional force, f, resisting the flow of one layer of fluid past the adjacent layer is proportional to the area, A, of the interface between the layers and to du/dr, the velocity gradient. This is Newton’s law and is given by;

where η, (eta, a Greek letter), the constant of proportionality, is called the co-efficient of viscosity. When the velocity gradient is unity and the area is 1 sq cm, η is equal to the force. Hence the co-efficient of viscosity, η, may be defined as the force per sq cm required maintaining a difference of velocity of 1 cm per second between two parallel layers 1 cm apart. It is evident that the dimensions of η are g cm-s. When the force is 1 dyne, η is called the poise after the French scientist Poiseuille. For most liquids η is much smaller than one poise and the viscosity is usually expressed in millipoise or centipoise. In the SI unit viscosity is kg m-1s-1.

The reciprocal of the co-efficient of viscosity is known as the fluidity, Ǿ, or,

Fluidity is a measure of the ease with which a liquid can flow.

Poiseuille Equation in Viscosity of Liquids