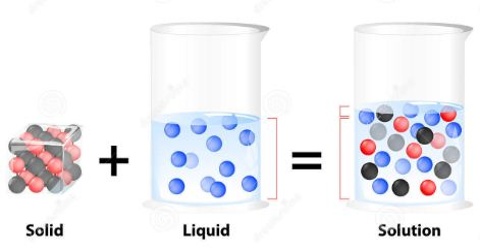 An understanding or the solution process will help us in the study of solutions. In all Cases in this discussion water will be taken as the solvent.

Let look at what happens when we dissolve NaCl, an ionic compound, in water, a polar liquid. When NaCl is added to water the water molecules, being polar, orient themselves on the surface of the crystal as shown in Figure.

The negative end of the polar water molecule orients towards the positive Na+ ions, while the positive end is oriented towards the negative Cl– ions. The dipole – ion attraction is strong enough to pull these ions from their positions in the crystal. 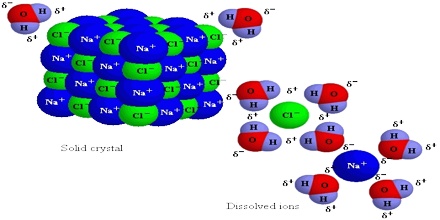 Fig: Interactions between water molecules and the Na+ and Cl– ions in NaCl crystal surfaces 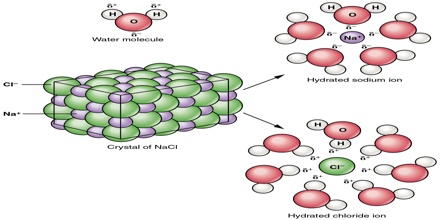 Fig: Hydrated Na+ and Cl– ions. Ions are surrounded by the water molecules.

The layer of oriented water molecules that surrounds ions help to neutralize the ion’s charge and keep ions of opposite charge from attracting each other strongly over long distances within the solution. In a sense, the solvent insulates the ions from each other. We can imagine that three types of interaction taking place to the solution process:

(i) interaction between solute particles of the solid, i.e., ions or molecules;

Energy is required to overcome the attraction between the solute particles in the solid, and the attraction between solvent particles, whale energy is released when solute and solvent particles interact with each other. The net solution process can be either exothermic or endothermic depending on the relative magnitude of the three energy changes. The solution of NH4NO3 in water is endothermic as the energy change in steps (i) and (ii) is greater than the energy change in step (iii). Conversely, solution of LiCl is exothermic because more heat is released in step (iii) than is absorbed in steps (i) and (ii).

Kinetic Theory of the Distribution Law