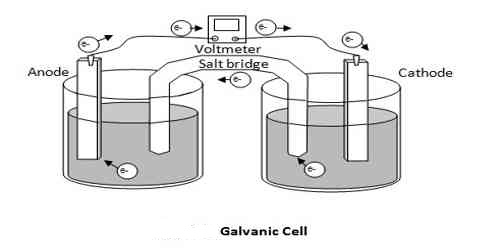 In this type of cell, the two electrodes are immersed in two electrolytic solutions separated by a salt bridge to avoid liquid junction potential. Daniel cell is an example of this Type of cell.

In this case no salt bridge is used. There is a phase boundary in the form of a porous diaphragm and the ions move at different speeds through the liquid junction. This results in a junction potential, Ej. An example is:

The cell potential will also include junction potential Ej

Electrode concentration cells (without transference): This type of cell depends on the difference in concentrations at the electrodes. This may again be of two types: (a) Gas electrode: Two gas electrodes immersed in the same solution of the ions of the gaseous clement, but the gas bubbled around the electrodes have different pressures. Amalgam electrode: In this case the amount of metal mixed mercury is different.

In this type of cells, the two electrodes are same but the concentrations of the electrolytes are different, and the two electrolytic solutions are placed in direct contact. There is no salt bridge between them.

Effects of Pressure Change in terms of Le Chatelier’s Principle