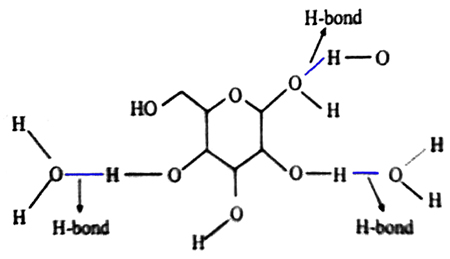 The carbohydrate given in the stimulus is glucose (C6 H12 O6). Structure is as follows:

It is observed that, there is present a lots of hydroxyl (- OH) groups at glucose molecule. The molecules of glucose are connected by an intermolecular force with the water molecules and the mechanism of their connection is known as “hydrogen bond”.

How many moles of water are present in per glucose molecule in honey?

How does the Ionization Potential of elements vary in a Period?