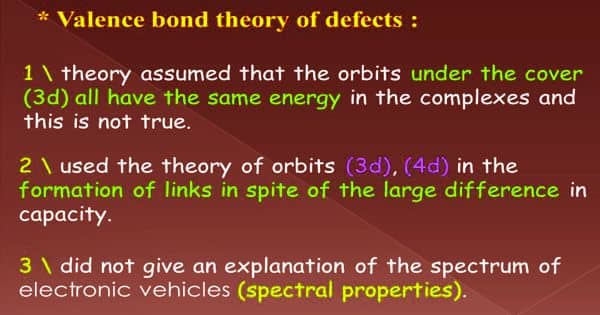 Valence bond theory, primarily the work of Linus Pauling regarded bonding as characterized by the overlap of atomic or hybrid orbitals of individual atoms.

Although VB theory was the principal way in which chemist visualized coordination compounds until the 1950s, it has fallen into disfavor due to its inability to account for various magnetic, electronic, and spectroscopic properties of these compounds.

Valence Bond Theory does not explain the behavior of complexes having d8 central ion (Ni+2, Pd+2, and Au+3) in forming the unexpected five coordinated complexes. Moreover, it is not clear why this theory prefers only square planar geometry such as tetrahedral

Another common cause in which VB theory will struggle is in the prediction of bonding in transition metal compounds as these undergo different types of bonding from most non-metals. VSEPR also fails when looking at transition metals due to the change from VB theory to MO theory.

What are the Effects of Hydrogen Bond on the Properties of Compounds?