The applications of Electro-Chemistry and related reactions range from the lead-acid batteries in cars to torch batteries as seen below.

An electro- chemical cell is a system consisting of two half-cells in which electrodes dip into an electrolyte. When they are connected electrically into a circuit, a chemical reaction occurs, which either uses or generates an electric current.

Generally, half-cells are composed of a metal electrode immersed in the corresponding solution of the metal ion as shown in the figure below. 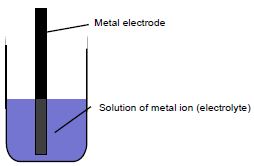 An electrolytic cell is an electro-chemical cell in which an electric current drives an otherwise non-spontaneous reaction.

Each half-cell is a portion of the electro-chemical cell in which a half-reaction takes place. A simple half-cell can be made from a metal strip dipped into a solution of its metal ion.

For example, the zinc-zinc ion half-cell consists of a zinc strip dipped into a solution of zinc sulphate.

Another simple half-cell consists of a copper strip dipped into a solution of a copper salt. In the cell, two half-cells are connected so that electrons flow from one metal electrode to the other through an external circuit. The figure below illustrates what is happening to the atoms in a zinc/copper voltaic cell. 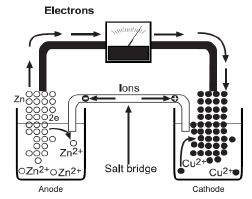 As long as there is an external circuit, electrons can flow through it from one electrode to the other. Zinc is a more reactive metal and has a greater tendency to lose electrons than copper. The zinc atoms in the zinc electrode lose electrons to form zinc ions.

The electrons flow through the external circuit to the copper electrode where copper ions gain the electrons to become copper metal.