Home Chemistry Cause of Lanthanide Contraction 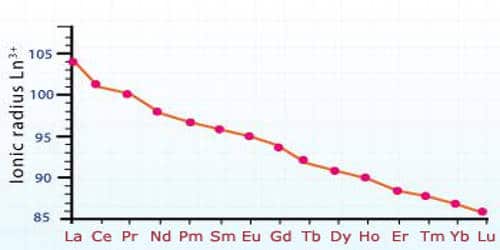 Cause of lanthanide contraction

Causes: As we move down the group from left to right in a lanthanide series, the atomic no. increases and for every proton, in the nucleus, the extra electron goes to 4f orbital. The lanthanide contraction is due to the imperfect shielding of one 4f electron by another in the same subshell. With an increase in the atomic number, the positive charge on the nucleus increases by one unit, and one more electron enters the same 4f subshell. The 4f orbital is too diffused to shield the nucleus effectively, thus there is a gradual increase in the effective nuclear charge experienced by the outer electrons.

The Lanthanide Contraction refers to the fact that the 5s and 5p orbitals penetrate the 4f sub-shell so the 4f orbital is not shielded from the increasing nuclear change, which causes the atomic radius of the atom to decrease. As we move along the lanthanide series, the nuclear charge and the number of 4f electrons increase by one unit at each step. The electrons in 4f subshell imperfectly shield each other. Shielding in a 4f subshell is lesser than in d subshell. Consequently, the attraction of the nucleus for the electrons in the outermost shell increases with the increase of atomic number, thus size decreases. The 4f orbital is too diffused to shield the nucleus effectively, thus there is a gradual increase in the effective nuclear charge experienced by the outer electrons. This decrease in size continues throughout the series.

The atomic size or the ionic radii of tri positive lanthanide ions decreases steadily from La to Lu due to increasing nuclear charge and electrons entering inner (n-2) f orbital. However, due to imperfect shielding, the effective nuclear charge increases causing a contraction in the electron cloud of 4f-subshell. With the increase in nuclear charge, the valence shell is pulled slightly towards the nucleus. This causes lanthanide contraction.

Purification and Uses of Zinc