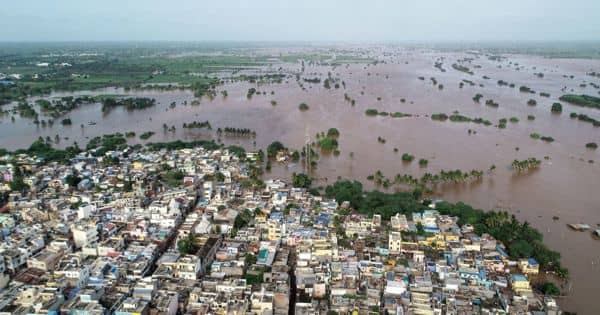 Climate experts warn that unless urgent action is taken, climate change will continue to increase the intensity of extreme rainfall, potentially leading to severe flooding. A flood occurs when water overflows onto normally dry land, and a flash flood occurs when flooding occurs less than 6 hours after an extreme rainfall event. Flooding can occur along the ocean, rivers, or lakes, and it can happen quickly or slowly, lasting a day, weeks, or months. Flooding can occur as a result of heavy rainfall, rising sea levels combined with high tides and/or storm surge, earlier and faster snowmelt, or when dams or levees fail.

As global temperatures continue to rise, an international research team has concluded that increases in extreme rainfall and associated flooding are expected to continue. Efforts to limit warming to +1.5 degrees Celsius will aid in limiting changes in extreme rainfall, though some societal adaptations will still be required.

Climate experts warn that, without urgent action, climate change will continue to cause an increase in the intensity of extreme rainfall that can lead to severe flooding.

Scientists from Newcastle University, the University of East Anglia (UEA), the Tyndall Centre for Climate Change Research, and the Instituto Nacional de Pesquisas Espaciais (INPE), So Paulo, Brazil, shared their findings in a new ScienceBrief Review published today (7 June). They discovered that in many parts of the world, extreme rainfall has increased the likelihood and magnitude of floods, severely impacting local populations and infrastructure. Flooding in larger, rural catchments is influenced by a variety of factors, and flooding is less directly related to extreme rainfall events.

Their research also indicates that increases in daily extreme rainfall rates have been observed globally and on continental scales throughout the twentieth and early twenty-first centuries, and that global warming is driving increases in short-duration rainfall extremes in some regions. According to the study, human activity has an effect on increases in extreme daily rainfall, increasing the likelihood of some significant events.

Rising sea levels, increased extreme precipitation and total precipitation, intensifying storm precipitation, and increasing rates of snow and ice melt all contribute to an increase in the risk of flooding in the United States. Flooding is becoming more severe as a result of climate change, putting an increasing number of inland and coastal communities at risk.

The findings indicate that the risk of flash flooding in urban areas has likely increased in recent decades as a result of the expanding impermeable landscape increasing surface runoff and extreme rainfall and that this trend is expected to continue.

Aside from the amount and intensity of rainfall, there are other factors that contribute to the risk of river and surface water flooding. River flooding is more likely if a large amount of water drains into water courses instead of being absorbed by the ground.

This is affected by the ground’s permeability and local relief; if the ground is less permeable and steeper, more water will reach streams and rivers. There will be more surface run-off into water courses if the ground has already been saturated by previous rainfall or if it has been baked hard by the sun. The extent to which flood waters become a hazard will also depend on whether or not the floodplain is protected by flood defenses.

“Global warming means the atmosphere can hold more moisture and could also change the way storms behave,” said Dr. Stephen Blenkinsop of Newcastle University’s School of Engineering. Increased rainfall extremes, combined with changes in other factors, may increase the frequency and severity of flooding in many areas.

“Even if we take action to reduce the extent of global warming, we will need to improve our understanding of how extreme rainfall and flooding will change in the future in order to adapt our cities and other communities to more frequent or more extreme events.”

“This is an active area of research,” Adam Smith of the University of East Anglia’s School of Environmental Sciences added, “and our review highlights that the science is becoming increasingly clear on how climate change influences extreme rainfall and how that combines with other factors to increase the chance of floods in many places.”