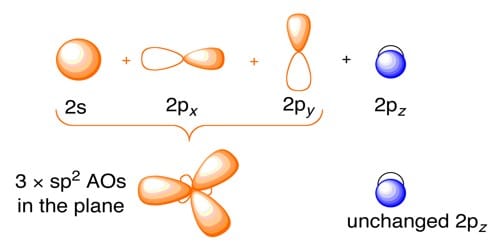 Formation and structure of ethylene molecule:

In ethylene and in other organic compounds having C = C bond, 2s and two 2p orbitals of carbon atom undergo sp2 hybridization.

Then the 2pz orbital on each carbon atom remains with one electron each. The two sp2 hybrid orbitals get overlapped by two hydrogen atoms containing unpaired electrons. They overlap with each other sidewise to form one C-C pi-bond. A pi bond is formed by the unhybridized 2pz orbitals of each carbon atom. There is a formation of a sigma bond and a pi bond between two carbon atoms.

When we look at the molecules of C2H4 it has 2 CH molecules and 4 H molecules. The carbon atom consists of 6 electrons and hydrogen has one electron. During the formation of CH2 = CH2, the electronic configuration of carbon in its ground state (1s2 2s2 2p1 2p1) will change to an excited state and change to 1s2 2s1 2px12py1 2pz1.

Alcohols (C2H5 — OH) are Covalent Compounds why they Soluble in Water?