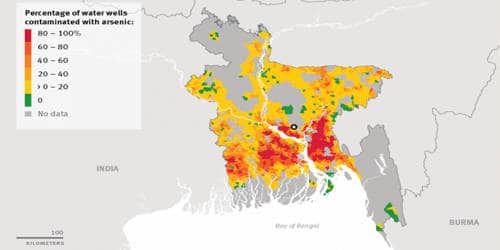 Thousands of people in Bangladesh are suffering from arsenic poisonings and more are being affected every day. Arsenic poisoning (arsenicosis) happens when a person takes in dangerous levels of arsenic. Arsenicosis is caused by drinking tube well water containing arsenic. Arsenic is a natural semi-metallic chemical that is found all over the world in groundwater. People who drink uncontaminated water do not catch arsenicosis from affected people. It can cause major health complications and death if it is not treated, so precautions exist to protect those who are at risk. The main recommendation for the people who are affected by arsenic is to drink water from a source that contains no arsenic.

The effects of arsenicosis are less severe among people who eat a healthy, balanced diet ideally containing fish and vegetables. This is an Initial treatment for arsenicosis and may be part of the reason why the number of arsenicosis patients in Bangladesh is still relatively low. Arsenic is toxic substance to human health and toxicity depends on the amount of arsenic intake, which is classified into acute, sub-acute and chronic toxicity respectively. The contamination of groundwater by arsenic in Bangladesh is one of the largest poisoning of a population in the history. It is believed that vitamins A, C and E are affected for treatment or arsenicosis.

Poisoning by arsenic is a slow process; it is due to a gradual build-up of the poison in the human body. Eventually, people start to show symptoms and become unwell. Deaths due to long-term poisoning make it even more important to address the problem as soon as possible. It is a silent killer. It is 4 times as poisonous as mercury and its lethal dose (LD) for a human is 125 milligram. Drinking water contamination causes the last variety of toxicity. This is in effect a race against time to safe water for everyone. Many people currently drinking arsenic-contaminated groundwater may develop problems soon. They must attempt to find a safe source of water. 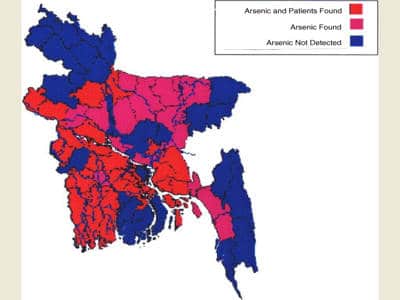 The majority of the tube wells in Bangladesh are free from arsenic, but they need to be tested to separate the safe from the unsafe and, in many areas, this has not yet been done. Tube wells, which have been tested for arsenic, should be painted green if they are safe or red if they are unsafe. Deep tube wells are free from arsenic and bacteria although they will need testing in the future to ensure that it is still the case. Surface water in ponds and rivers is a potential source of arsenic-free water. However, most surface water in Bangladesh is heavily polluted with dangerous bacteria. No surface water should be used without some form of treatment. If a latrine empties into a pond, if a pond is used for fish cultivation with the use of cowdung, if it receives run off water from nearby fields where pesticides or fertilizer have been applied, if it is used for washing livestock, the water should definitely not be used for drinking even after treatment. Care should be taken when using river down-stream of large cities such as Dhaka, as it may contain industrial pollutions.

Rainwater can be collected. This water is free from arsenic and bacteria although care must be taken to ensure that the container is clean. If there is no source of water other than a red tube well make sure you do the following: leave the water to stand in a pitcher overnight and filter the upper portion through another pitcher containing sand which will remove the arsenic. Boiling tube well water will not remove the arsenic. However, arsenic in the environment is not immediately dangerous, and it is rare to find toxic amounts of arsenic in nature.

Contribution of Women in nation-building