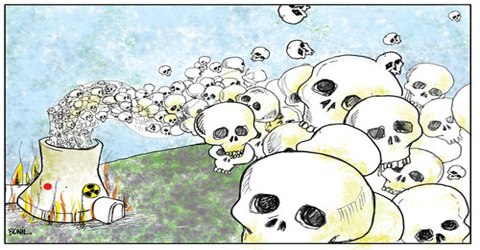 Mankind felt the impact of nuclear energy for the first time in 1945 when two atom bombs wiped out Hiroshima and Nagasaki in just under ten minutes. Since then, nuclear weapons, more powerful than the earlier ones, have been developed by the scientist’s. Intercontinental ballistic missiles, rockets and many other destructive weapons have also been deployed.

A race is constantly going on among the powerful nations to achieve nuclear supremacy. We are particularly thing on a nuclear volcano. Any accidental switch on to a push button will lead this world to dust. Men, who will live, may be victims of incurable diseases. The richest nations are investing billion and billion dollars for the nuclear purposes. It is said that very significant percent of this vast amount of dollars can remove the poverty from the world.

However, nuclear energy is not always destructive. If it is used properly, it can bring imminence benefit for mankind. Nuclear energy can be used for producing electricity, running different power plants, radioactivity etc. It can also help in pest control, preservation a food, agriculture and biological research. So nuclear power is a great tool that can be used for the betterment of mankind.

Researchers are Looking into how Children Learn to Speak