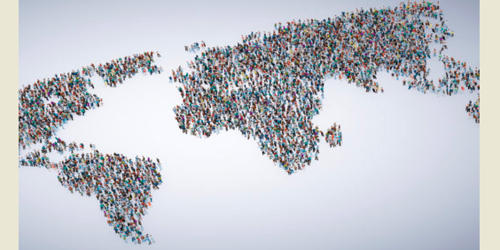 Population explosion is a constant threat to our environment and existence. It refers to the rapid and dramatic rise in the world population that has occurred over the last few hundred years. Especially in Bangladesh, the population is growing at such a high rate that the environment may soon fail to supply the people with their minimum necessities. Global warming which occurs mostly due to activities by humans is one of the factors for climate change. Unless we take immediate steps to stop this rapid growth of population, our environment will one day encounter unpredictable difficulty and danger. Due to large-scale improvement and development in medical facilities, the average age of a person in the world has increased. Consequently, the inhabitants may experience destruction.

With the growth of the population, people need more things. They need more food, clothes, accommodation, furniture, education, and medical facilities, and so forth. Most of the growth is currently taking place in the developing world, where rates of natural increase are much higher than in industrialized countries. But a developing country like Bangladesh cannot supply the people with these necessities. A great number of people are deprived of basic educational and medical facilities. Many people are not getting jobs to earn their living. A lot of people are making their homes in the land of cultivation. Vehicles are increasing by the day and causing traffic jams in towns and cities. This has created many problems like unemployment and shortage of food houses, transport, water supply, etc. Being unemployed some people are becoming addicted to drugs and involved in terrorism. Besides a large number of people make their latrines on the bank of the river and canal and throw waste and filth in the open place. Thus the environment is becoming unhealthy.

It is the right time to control the overgrowth of population. Unless we attempt to control it to a considerable extent our environment is certain to face destruction. As more and more humans are purchasing automobiles, our air is getting polluted. Therefore, to save ourselves and live peacefully and happily, we should take immediate measures to keep our population within a limit. Humans are still able to withstand the climate and adapt accordingly, but animals cannot. This is why wildlife is getting extinct as well.

The environment is in trouble for the rapid growth of the population. The human population explosion not only affects humans but also our environment and wildlife. As this growth is high, the environment cannot provide people with all the necessary things. The increasing population does not get basic needs. As more population requires more resources, deforestation is happening at a faster rate which takes away the homes of these animals. Cultivable land is being pre-occupied and finally filled up with people. The heavy unemployment problem is also leading the people to the dark world of crimes and the country will have no hope of progress unless proper steps are taken to control this problem. If the population rates continue to rise at this rate, then we won’t be able to survive for long. Therefore, we must take measures to control the population.

Your first day at school

The Importance of Learning English