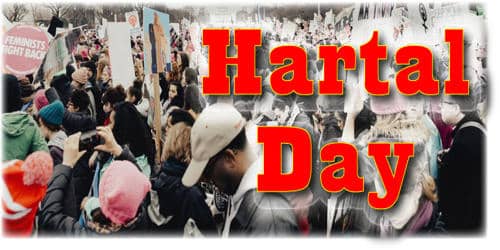 A hartal day is a symbol of non-violent protest. In modern state, hartal has become a common affair which is the symbol of non-violent protest. Generally, a hartal day is observed to compel some authority to fulfill some demands. When dissatisfaction grows among a group of people or political parties, hartal becomes a way to show that. The opposition political parties observe hartal to protest against the corruption, misuse of power, and the evil deeds of the ruling party. People walk in a line with chanting slogans. They carry placards, banners, etc. which exhibit their viewpoints aiming at the people and government.

Nowadays, it has become very frequent. But it is totally different from the usual working day. Because on a hartal day people normally stay at home. But the government servants have to attend their offices. On a hartal day, the normal course of life is stopped. All means of transport and vehicles do not move on the roads. During banal motor vehicles do not run on roads, people move on foot and sometimes rickshaws are permitted to ply on roads. All means of transport and vehicles do not move on the roads. It affects the life and economy of a country because, on a hartal day, private firms, mills, and factories remain closed. On the day the picketers keep themselves busy in picketing and making violent with the police who are employed to prevent any sort of violence and avert unwanted events. As a result of the procession, clashes occur between police and the precisionists. Sometimes it takes a terrible situation which the police cannot control. On a hartal day, young people play different games on the highways, some enjoy watching satellite Tv Programs, some complete their extra work.

But I never think hartal is an effective way to press and realize the demands of the citizens of a country, especially in our country. The roads look desolate. The economy of the country suffers a heavy loss. Mills, factories, and industries stop their work. Hartal has a serious negative impact on the economy of the country as well as on the normal life of the city inhabitants. All the business centers, markets, and shops remain closed. The banks cannot operate any transactions. So, it is high time we gave up such a kind of destructive protest. We should find out other peaceful ways of protest to fulfill some demands of a group of people or political parties. In a word, the day does not bear any good things accept suffering to the common people.