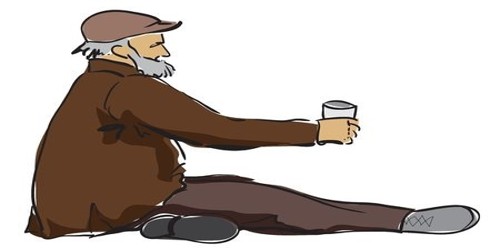 The man who begs alms on roads and streets is called street beggar. Begging is not employment. He earns his livelihood by begging in a street. A street beggar is a familiar figure in our country. He goes door to door for begging. He is usually seen to beg to stand by the roadside. He is a familiar figure in towns and cities. He is a very poor man and lives on begging. He always suffers from malnutrition and always suffers from any kind of illness. Usually, he is physically deformed and thus lives on other charities. His life is pitiable and deplorable. He suffers more and more in the rainy and winter season.

He is seen always in rugged clothes and is dirty. He wears a torn and patched dress. He carries a bowl with him. He is known to all of us. The street beggars may be either male or female. Whenever a street beggar sees a passer-by, he begs alms by spreading the bowl towards the passer-by. They are young or old, weak or strong. Blind and lame beggars are also seen there. He stands at the roadside and stretches his hand with a shout for money. If he gets any alms, he becomes happy and prays for the person who has given him alms. All the streets beggar have their own way of lie and mode of approaching for alms. He draws people’s attention through appealing in various ways like shouting, singing and so on. He tries his best to draw the sympathy of the passers-by with his peculiar voice. He often recites from the holy Quran and tries to draw other’s attention. Sometimes he uses his tricks to earn more. He usually gets a small amount and finds it hard to support himself and his family.

He leads a very deplorable life. They always deprive of their rights. He lives from hands to mouth. He begs from dawn to dusk and returns home with whatever he gets. He cannot give a good education to his children. He leads a life of sufferings and pains. He is born unsung, remain unsung and die unsung. Again, someone becomes disgusted with his loud shouts and avoids him. We should mercy by giving alms to a street beggar who is unable to work and consequently fails to maintain himself or his family. The government should rehabilitate them in proper places. If we can help them and develop them then they will become asset for the nation. So, the government should make it possible for the street beggar to take part in economic activities. So, everybody should take an immediate project for them.