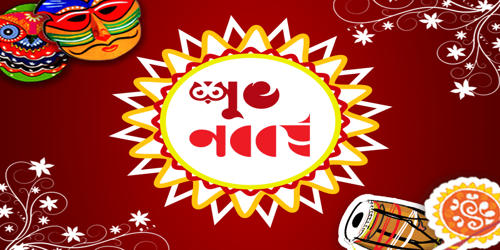 The first day of Bangla new year is the most colorful day for all Bangladeshi people. The first day of Baishakh marks the beginning of the Bengali new year. This day is becoming more popular among the people irrespective of caste or creed. It is not a religious festival. It has a universal appeal as a social festival. The tradition for the celebration of New Year’s Day is found among many nations of the world. The people of Iran observe “Naorose” as the first day of the new year. The people of Europe also observe the 1st day of New Year to welcome the happy new year. “Pahela Baishakh” is being celebrated by All Bangladeshi people every year on 15th April.

Emperor Akbar reformed a calendar in order to fix a date to collect taxes from his people. So it is believed that Pahela Baishakh is celebrated during the reign of Mughal Emperor Akbar. On this day farmers pay their tax. The shopkeepers start a new account which is also known as ‘halkhata utsab”. They invite their customers and entertain them with sweets. Bengali New Year’s Day on the 1st day of Baishakh was introduced during the reign of Mughal Emperor Ai kbar. He introduced the day for the collection of tax (Khanna) from the After the independence of Bangladesh, the Bengali New Year’s Day has been declared an official holiday.

The most colorful festival of Pahela Baishakh is the “Mangal Shovajatra” the biggest and the colorful rally which is organized by the Charukala-Fine Art Institute of Dhaka University. Fairs or Baisakhi Mela are held in different places. People go to these fairs with little children and purchase different handicrafts, toys, agricultural products, bangles, and sweet dishes. The day first begins at dawn under the banyan tree of Ramna with the songs of Tagore peasantry. Nazrul welcoming the Bengali new year. Traders and shopkeepers open ‘Halkhatat a name account book and offer sweets to their customers and clients. The people of both rural d urban areas observe the day by arranging various kinds of cultural functions. Many people enjoy Bengali food (dish) on this day such as “Pantha-Ilish”. Different cultural organizations also organize different programs to make this day a more colorful Chayanat, a cultural organization starts their program in the early morning with the renowned song of Tagore “Eso he Baishakh.”

In rural areas, the fairs arranged on Pahela Baishakh or ‘Bangla Naba-Barsha are very attractive. People keep their houses neat and clean, wear new traditional dresses, and celebrate the day with their loved ones. Different kinds of handicrafts made by rural people of various professions are brought to display and to sell in those fairs. Different festive like jari gan, pala, gan, Gambhira, puppet show also takes place in different ways.

Some functions are arranged locally in some regions of our country. The most remarkable function among them is the Bali Khela or Wrestling held in the Chittagong region. Another mentionable function of the northern region of our country is the Gambhira. Newspapers also publish special features and Television and radio Channels broadcast special programs. The celebration tradition and observance of the festival “Bengali New Year” remind us about our glorious past and tradition and inspires us with new enthusiasm to look back to the past. All people welcome the new year and celebrate the day with the hope that the new year will bring peace and happiness to their life.