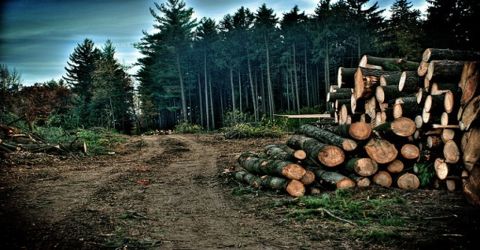 Cutting down of trees indiscriminately to meet up the basic needs of food and housing and thus destroying the ecological balance is called deforestation. Deforestation occurs for multiple reasons: trees are cut down to be used or sold as fuel or timber, while cleared land is used as pasture for livestock, plantations of commodities and settlements. Man needs houses, furniture, firewood etc. For this, man uses wood. Wood is also used in big industries. Man makes shops, educational institutions, boats, launches, trucks and other vehicles that lead many people to cut down trees. It causes threats to our environment. There are also many people engaged in trafficking trees from the forests making vast areas almost desert and leaving many wild animals in danger. All these have multifarious effects over the environment. Floods and droughts, cyclones and tornadoes are the common phenomena in a region or in a country where deforestation is going on. In our country less rainfall, excessive rainfall, bad harvest, soil erosion, extinction of wild animals, green house effects are the problems prevailing due to deforestation. To prevent deforestation some pragmatic steps should be taken. A social movement should be launched to prevent deforestation. Social awareness can be raised regarding bad effects of deforestation. For this purpose, environment science and study on ecology should be introduced from school level.

Deforestation is the permanent destruction of forests in order to make the land available for other uses. An estimated 18 million acres (7.3 million hectares) of forest, which is roughly the size of the country of Panama, are lost each year, according to the United Nations’ Food and Agriculture Organization (FAO). Massive awareness regarding tree plantation can be raised through TV programmes. And above all, our forestry department should execute all codes of manner strictly at least to reduce deforestation to sonic extent.