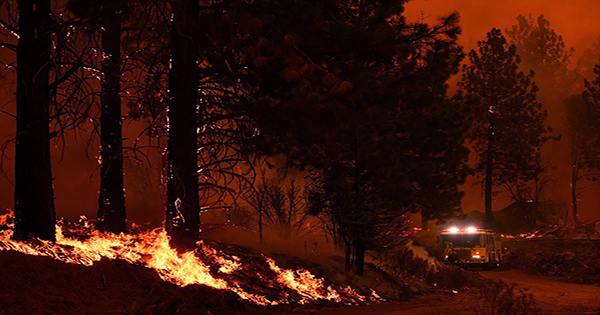 Wildfires are threatening to engulf the Giant Forest of Sequoia and King’s Canyon National Parks, threatening the world’s largest tree (by volume) (KNP). Rangers have wrapped the base of the tree in a heat-proof foil blanket in a desperate attempt to safeguard this green symbol.

According to the National Park Service, the KNP Complex fire has been burning in Sequoia National Park since it was started by lightning on September 9th (NPS). It has grown to encompass a 9,365-acre (3,800-hectare) region at the time of reporting, and it is still expanding at a breakneck pace.

The Gigantic Forest, home to General Sherman and many other giant sequoia trees (Sequoiadendron giganteum), commonly known as giant redwoods or Sierra redwoods, is currently under threat from the spreading fire.

“Crews are prepping the Giant Forest before the fire reaches that region by removing fuel and applying structure wrap to some of the iconic monarch sequoias that characterize Sequoia National Park’s most famous location,” the National Park Service announced late Thursday on Facebook. “The fire is spreading in all directions.”

The trees are being wrapped in specialist aluminum sheeting, “like tinfoil basically,” that is used by firefighters to safeguard fire-threatened structures, according to Mark Garrett, a spokesperson for the KNP Complex fire.

General Sherman stands at a height of 83.8 meters (275 feet) and has a base diameter of 11 meters (36 feet). It holds the record for the world’s largest single-stem tree by volume, with a staggering volume of 1,487 cubic meters (52,500 cubic feet). Nobody knows for sure how ancient it is, but most estimation put it at well over 2,000 years.

However, General Sherman isn’t the only well-known local. The Giant Forest is home to five of the top ten biggest trees on the planet, as well as over 2,000 sequoias.

The Lindsey Creek tree, a coast redwood in Lindsey Creek, California, was the previous world record holder, standing proudly at 118.87 meters (390 feet). The behemoth, however, fell during a storm in 1905.