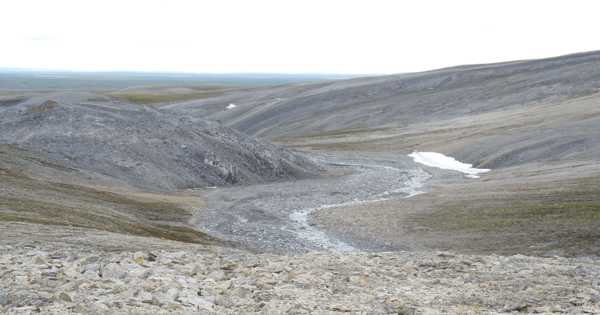 Climate scientists are warning that thawing permafrost in the Siberian Arctic could be a “methane bomb” waiting to detonate, with far-reaching consequences for our planet. For years, climate scientists have warned the world that rising Arctic temperatures risk detonating a methane “time bomb” of ancient greenhouse gas deposits trapped beneath the ice. According to The Washington Post, the bomb’s timer is running dangerously low.

According to research published in the journal Proceedings of the National Academy of Sciences, satellite imagery of northern Siberia shows that vast stretches of limestone that were trapped under permafrost are emerging and thawing out. As the limestone warmed up during a Siberian heatwave last year, pockets of gas escaped, releasing a massive amount of methane that had previously been safely sequestered out of the atmosphere.

Satellite imagery of northern Siberia shows that vast stretches of limestone that used to be trapped under permafrost are emerging and thawing out. Now, The Washington Post reports that the bomb’s timer is ticking dangerously low.

Nikolaus Froitzheim, a geoscientist at the Germany’s University of Bonn, is concerned about the study’s findings. As the climate crisis worsens, correctly interpreting this data “may mean the difference between catastrophe and apocalypse,” he tells Tara Yarlagadda of Inverse.

Temperatures in the basin rose nearly 11 degrees Fahrenheit above normal in 2020, causing the limestone to release trapped ancient methane deposits. The data surprised Fritzheim and other researchers, who had expected to find gas in other places.

The scientists, who are from various European and Russian research institutes, discovered the thawing limestone in an unusual way. According to Inverse, the scientists’ satellite scans revealed the alarming methane emissions first, thanks to a mapping technology called PULSE, and they pieced together where they came from later.

Holmes, the researcher who did not work on the study, told WaPo that the research deserves more scrutiny before anyone panics. However, he cautioned that releasing all of the gas currently trapped in the world’s permafrost could result in catastrophic climate change.

“What we do know with a high degree of certainty is how much carbon is locked up in permafrost,” he told the Washington Post. “It’s a large number, and as the Earth warms and permafrost thaws, that ancient organic matter becomes available to microbes for microbial processes, which emit CO2 and methane. “If something in the Arctic is going to keep me awake at night, that’s what it is.”

According to the CCAG warning, “scientists have been astounded that warm weather conducive to permafrost thawing is occurring roughly 70 years ahead of model projections.” According to the Moscow Times, the Arctic could lose 89 percent of its permafrost by 2100.

The CCAG report warns that rising temperatures could push the Arctic to a “irreversible” tipping point, resulting in the release of methane and other gases, as well as crumbling infrastructure in Siberia, including dams and a nuclear power plant.

“The story is straightforward,” the report concludes. “Climate change is occurring at a faster rate than anticipated. One consequence is the loss of ice in the polar regions, which is also a driver of faster global warming and disastrously fast global sea-level rise.”

Despite the region’s low temperatures and snow, methane concentrations increased by about 5% and are expected to continue through the spring of 2021. “We would have expected elevated methane in areas with wetlands,” said Nikolaus Froitzheim, a professor at the Institute of Geosciences at the University of Bonn and one of the researchers behind this study. However, these were not over wetlands, but rather on limestone outcrops. There isn’t much soil in these. It was a surprising signal from hard rock rather than wetlands.”