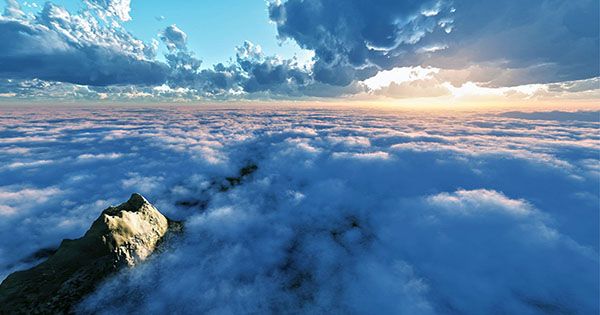 As the effects of climate change get more intense, it’s only natural that the solutions to the dilemma do as well. One recent proposal that has gotten a lot of attention matches those criteria perfectly: it’s huge, it’s bold, and it appears to be more the domain of a supervillain than a scientist at first glance. Simply put, we BLOCK THE SUN.

Okay, maybe that was oversimplifying things. The idea is to fill the atmosphere with clouds of seawater particles, not to completely block out the sun, but to reflect it.

The Marine Cloud Brightening Project (MCBP), a research group comprised of scientists and engineers from the University of Washington, the Palo Alto Research Center, and the Pacific Northwest National Library, explains on its website that clouds reflect solar radiation (sunlight) back to space, producing cooling effects locally and across the planet. We might be able to reflect enough sunlight to offset part of the planet’s warming caused by humans if we could just find out how to make and manipulate clouds.

They aren’t the first to propose such a concept, as bizarre as it may appear. Geoengineering is a branch of research that has sparked a debate: some experts believe it will cause more issues than it solves, while others argue that it is the only solution to address the climate catastrophe.

The research explains that “the reflectance of clouds increases as the number of water droplets inside the cloud grows and their size decreases.” “This brightens and extends the life of the clouds, reflecting sunlight and enhancing cooling.”

You might believe that “simply generate a bunch of shiny clouds” is just as difficult as “halt global warming,” but it’s not as difficult as it appears. Scientists have had a notion of how it could operate for decades, primarily because it has already occurred. Every day, thousands of ships crisscross our waters, emitting greenhouse gases, harmful chemicals, and tiny particles that mix with the clouds above and reflect sunlight away from the Earth.

According to the MCBP website, “as these particles mix into low clouds, particularly clouds over the ocean, they modify their properties by adding droplet nuclei, accelerating the formation of more tiny droplets, and brightening the clouds.” “The huge quantities of man-made particles currently created by industrial and other human activities are likely cooling the earth sufficiently to offset warming caused by greenhouse gases, although this effect is not fully quantified.”

Step Aside Death Valley, the Hottest Surface Temperature on Earth is Actually Here