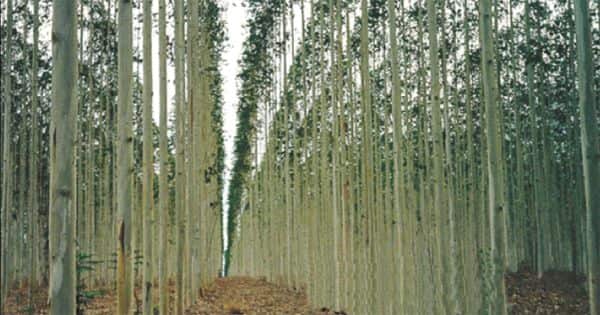 Global warming is characterized as a rise in and expected continuation of the average observed temperature of near-surface Earth’s air and oceans. In order to tackle the increasing challenge of global climate change, scientists are now proposing that we genetically engineer trees so that they can easily draw more carbon out of the atmosphere. Earth’s temperature increases are driven by exotic components such as water vapor, carbon dioxide (CO2), ozone, methane (CH4), nitrous oxide (N2O), and chlorofluorocarbons (CFCs) that absorb heat and thus raise air temperatures, resulting in disasters such as storms, droughts, and more frequent flooding.

Scientists are developing a new generation of GM trees that could tackle climate change by sucking more carbon dioxide out of the air. Scientists at the University of Arizona and Oregon State University have genetically modified trees, so they do not release a gas that has shown to contribute to climate change.

An elongated root will be able to contain more carbon than the shorter, current ones. Engineering large numbers of trees with longer roots may mitigate global warming by dramatically increasing the amount of CO2 they consume from the atmosphere.

Genetic engineering is the newest research method for the production of better crop varieties. Such crops can help to increase farm productivity, boost food production, reduce the use of agricultural chemicals, and make our environment healthier. The notion of genetic hacking of forests is contentious, to say the least. Yet for scientists who embrace the theory, taking chances is safer than doing nothing, when we gaze at a world formed by the ravages of climate change.

The rapid growth of certain tree species is a potentially beneficial consequence of climate change. This is attributed to a rise in the concentration of carbon dioxide in the atmosphere during the 20th century, which enhances the photosynthetic behavior of trees. The rise in temperatures also makes it possible to prolong the time over which trees grow, but raises their water needs accordingly.

“There are many different ways in which forests could be made to be better carbon sinks,” Val Giddings, a geneticist and senior fellow at the Information Technology and Creativity Foundation told CBC. “But maybe at the top of the list, I’d like to offer gene editing.”

Plants like poplar trees produce isoprene when they’re under heat. For example, as temperatures increase abruptly or during drought. When released into the atmosphere, it matches the emissions produced by fossil fuel-fired engines, producing potentially dangerous ground-level ozone.

Other experts remain unconvinced that genetically engineered plants in the wild may cause unintended harm along the path. “Plants made up of trees with accelerated growth rates [would be] a huge, dangerous experiment that threatens forest ecosystems,” Lucy Sharratt, coordinator of the Canadian Biotechnology Action Network, told CBC.

But for Séguin, the possible advantages of the scheme are too strong to merely step along. “I don’t think gene editing is the solution, but it’s part of the solution,” said Séguin to CBC.

The team planted them in Oregon and Arizona and watched them progress for around three or four years. By genetically altering the genetic code of the poplar tree, scientists have been able to suppress the production of isoprene without influencing how much biofuel they have created.

Benefits of School Library for Students