Mohandas Karamchand Gandhi, popularly known as Mahatma Gandhi, was born on 2nd October 1869. He was a great freedom fighter. He freed India from British rule in 1947. He was a lawyer by profession. He went to England to study law. He could have practiced law and spent a comfortable life. However, he rather chose to fight the British by participating in India’s struggle for freedom. He went to jail many times in the freedom struggle. He carried out various freedom movements and inspired several Indian citizens to join him in the same. He traveled throughout the country. The British behaved cruelly with the Indians. This invoked anger in many Indians who came forward to fight the British. He fought against the Britishers through peaceful methods. These movements had a huge impact on the British. His policies forced the Britishers to leave the country. 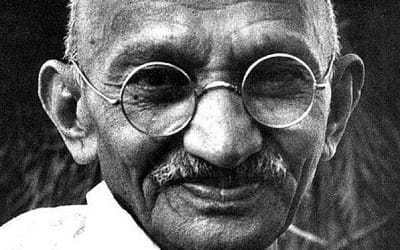 His father was a Deewan (council of state) at Rajkot. His mother, Putlibai, was a very religious lady and used to tell him stories from the scriptures and mythology. He lived a simple life. At the age of 13, he was married to Kasturba. He wore pure khadi. He was shot dead on 30th January 1948.

Mahatma Gandhi’s philosophy of non-violence is probably his most important contribution. Unlike various other leaders of his time, Gandhiji did not resort to violent and aggressive means to drive the British away. This philosophy of non-violence is known as Ahimsa. He took the path of truth and non-violence and was supported by a large number of Indians. Furthermore, he became the topic of discussion in many international media outlets. He played a major role in freeing India from the British rule. Hence, many oppressed people felt great relief because of his efforts. Filled with the feeling of hurt and anger, they took to aggressive means to drive the British officials out of the country. His ideologies were different from most of the freedom fighters. Secularism is yet another contribution of Gandhi. His belief was that no religion should have a monopoly on the truth.

Mahatma Gandhi is known to be one of the greatest freedom fighters. He was a true leader. His role in social and political reform was instrumental. His ideologies continue to inspire people even today. However, Mahatma Gandhi chose a completely different way thereby astonishing the others. For his services and sacrifice for the country, he was named the Father of Nation.