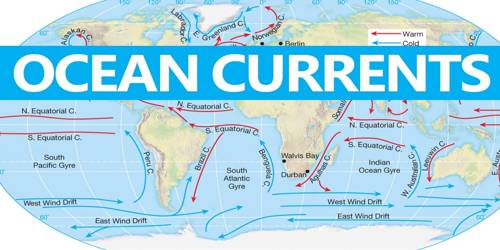 Ocean currents have a number of direct and indirect influences on human activities. West coasts of the continents in tropical and subtropical latitudes (except close to the equator) are bordered by cool waters. Their average temperatures are relatively low with narrow diurnal and annual ranges. There is fog, but generally, the areas are arid. West coasts of the continents in the middle and higher latitudes are bordered by warm waters which cause a distinct marine climate. They are characterized by cool summers and relatively mild winters with a narrow annual range of temperatures.

Ocean currents act much like a conveyer belt, transporting warm water and precipitation from the equator toward the poles and cold water from the poles back to the tropics. Thus, currents regulate global climate, helping to counteract the uneven distribution of solar radiation reaching Earth’s surface. Without currents, regional temperatures would be more extreme—super hot at the equator and frigid toward the poles—and much less of Earth’s land would be habitable.

Warm currents flow parallel to the east coasts of the continents in tropical and subtropical latitudes. This results in warm and rainy climates. These areas lie in the western margins of the subtropical anti-cyclones. The mixing of warm and cold currents help to replenish the oxygen and favor the growth of plankton, the primary food for the fish population. The best fishing grounds of the world exist mainly in these mixing zones.

Global warming threatens ocean currents. If the major ocean currents go away the climate near the equator will heat up, and the North will cool down. Additionally, the ocean losing oxygen in the deep parts would threaten the variety of life in the depths and the aerobic bacteria life required for oxygen generation on the surface. The lack of aerobic life can facilitate the growth of anaerobic life which exhale poisonous gas.

Why is the surface of the earth uneven?