Home Geology Which Forces Affecting the Velocity and Direction of Wind? 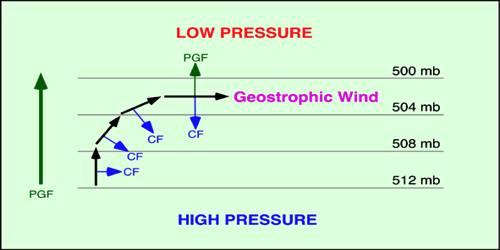 Forces Affecting the Velocity and Direction of Wind

The main factors that affect wind direction and speed are the pressure-gradient force, the Coriolis force, and friction. These factors working together cause the wind to blow in different directions and at different speeds. The air in motion is called wind. The wind blows from high pressure to low pressure. Air flows from areas of higher pressure to areas of lower pressure.

The wind at the surface experiences friction. In addition, rotation of the earth also affects the wind movement. The force exerted by the rotation of the earth is known as the Coriolis force. Thus, the horizontal winds near the earth surface respond to the combined effect of three forces – the pressure gradient force, the frictional force and the Coriolis force. In addition, the gravitational force acts downward.

It affects the speed of the wind. It is greatest on the surface and its influence generally extends up to an elevation of 1 – 3 km. Over the sea surface, the friction is minimal.