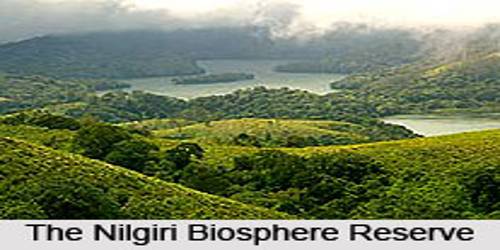 The Nilgiri Biosphere Reserve (NBR), the first of the fourteen biosphere reserves of India, was established in September 1986. It is an International Biosphere Reserve in the Western Ghats and Nilgiri Hills ranges of South India. It embraces the sanctuary complex of Wyanad, Nagarhole, Bandipur and Mudumalai, the entire forested hill slopes of Nilambur, the Upper Nilgiri plateau, Silent Valley and the Siruvani hills. The total area of the biosphere reserve is around 5.520 sq. km. It was declared a World Heritage Site by UNESCO in 2012. The Nilgiri Biosphere Reserve possesses different habitat types, unspoiled areas of natural vegetation types with several dry scrubs, dry and moist deciduous, semi-evergreen, and wet evergreen forests, evergreen sholas, grasslands, and swamps. Fauna includes over 100 species of mammals, 350 species of birds, 80 species of reptiles, about 39 species of fish, 31 amphibians and 316 species of butterflies. It includes the largest known population of two endangered animal species, namely the Nilgiri Tahr and the Lion-tailed Macaque. The largest south Indian population of elephant, tiger, gaur, sambar, and chital as well as a good number of endemic and endangered plants are also found in this reserve. It includes the Bengal tiger, Indian leopard (and black panther), gaur, Indian elephant, mongoose, Malabar giant squirrel, lion-tailed macaque, gray langur and Nilgiri Tahr. The habitats of a number of tribal groups remarkable for their traditional modes of harmonious use of the environment are also found here.

The topography of the NBR is extremely varied, ranging from an altitude of 250 m to 2,650 m. About 80 percent of the flowering plants reported from the Western Ghats occur in the Nilgiri Biosphere Reserve.