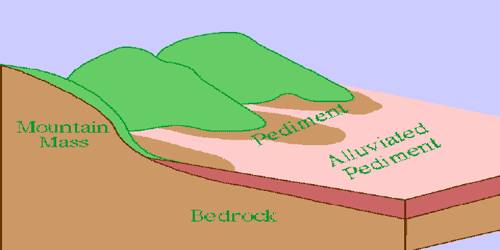 Landscape evolution in deserts is primarily concerned with the formation and extension of pediments. Gently inclined rocky floors close to the mountains at their foot with or without a thin cover of debris are called pediments. Such rocky floors form through the erosion of mountain front through a combination of lateral erosion by streams and sheet flooding. A pediplain is an extensive flat terrain formed by the coalescence of pediments. A pediment is a gently sloping bedrock surface created by lateral erosion or by mechanical weathering.

A pediment is underlain by bedrock that is typically covered by a thin, discontinuous veneer of soil and alluvium derived from upland areas. The development of pediments and alluvial fans is progressive with the uplift of mountains and subsidence of adjacent basins. Pediplains are formed at the end of major tectonic cycles during the transition from the orogenic stage of development of the earth’s crust to the platform stage. The slope of the landscape is gentle enough that weathering and transport of sediments from upland areas and the pediment that no significant stream incision occurs.  The process through which pediplains are formed is called pediplanation, and the concepts that try to explain this phenomenon were first developed in 1942 by geologist Lester Charles King. 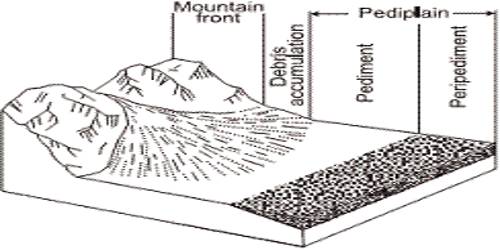 The formation of a pediplain relies on erosion, which is the force behind the creation of a pediment. Pediment-forming processes are much-debated, but it is clear that rocks such as granite and coarse sandstone form virtually all pediments in the Mojave Desert. The formation of a pediment has not been well documented and accordingly remains a subject of study, but there are existing theories that attempt to explain the process. Erosion starts along the steep margins of the landmass or the steep sides of the tectonically controlled steep incision feature over the landmass. Typical pediments have slopes with angles between 0.5 and 7 degrees and are concave in shape. These rocks disintegrate grain-by-grain, rather than fracturing and then being reduced in grain size by alluvial transport processes. Once, pediments are formed with a steep wash slope followed by the cliff or free face above it, the steep wash slope and free face retreat backward.

Pediment: A gently sloping erosion surface or plain of low relief formed by running water in the arid or semiarid region at the base of a receding mountain front. Much of this alluvial material is in transit across the surface, moving during episodic storm events or blown by the wind.

Peneplain: It is a denudation plain that has formed where mountainous regions were leveled under humid conditions. They are formed at the end of major tectonic cycles during the transition from the orogenic stage of development of the earth’s crust to the platform stage. When tectonic subsidences occur, peneplains may become buried by sedimentary strata; when uplifts occur, peneplains become raised.

Pediments are best formed in arid and semi-arid areas where rainfall is intense for brief moments of time. This method of erosion is termed as a parallel retreat of slopes through backwashing. So, through parallel retreat of slopes, the pediments extend backward at the expense of the mountain front, and gradually, the mountain gets reduced leaving an inselberg which is a remnant of the mountain. Pediments that form in humid areas are usually obscured by vegetation and may be hard to notice. That’s how the high relief in desert areas is reduced to low featureless plains called pediplains.