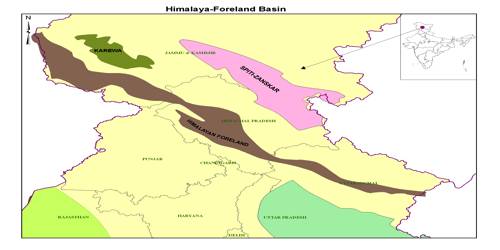 Karewas is the thick deposits of glacial clay and other materials embedded with moraines. These deposits are found in the Kashmir valley between pir panjal and Zaskar range in the Himalaya. Geologists consider that the area of Kashmir valley was filled with water of Thesis sea but with the passage of time many earthquakes came and a part of Baramulla range broken down, which resulted in emptying of water from the valley leaving behind the molds of karewas. These karewas are widespread to the west of river Jhelum in the valley. The Karewa deposits in the Kashmir valley have been conventionally divided into two stages, lower and upper, representing argillaceous and arenaceous facies respectively.

Karewa sediments are treasures of many human civilizations and habitations. The Stone Age man has survived the harshest of the Pleistocene glaciations through these karewa. The Brahman rulers have also left their footprints on these sediments, which can be seen near Pattan, Awantipora, and Mattan. Rishis and Sufi saints are not far behind when it comes to occupying the highest reaches of the Karewas. The rest of the Karewa sediments occupy the middle of the entire flank of the valley, including Pampore, Srinagar, Burzuhom, Dilpur, Pattan, Parihaspora, and parts of Baramulla District. These represent upper Karewas of the valley. As far as the age of Karewas is concerned, the lack of chronological control has impeded the development of a detailed reconstruction of the Karewas depositional history in the intermountain basin of the valley. 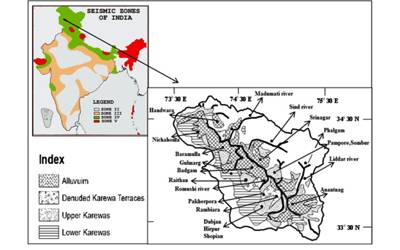 Karewas were formed during the Pleistocene Period (1 million years ago) when the entire Valley of Kashmir was underwater. These are lacustrine deposits. According to geographers, the Karewa Formation is glacio- fluvial-lacustrine and aeolian loess of Plio-Pleistocene age. The drainage was impounded and a lake of about 5000 sq. km area was developed and thus a basin was formed. The thickness of karewas is about 1400 m.

Karewa sediments are witness to and treasure of many human civilizations and habitations. Therefore, it is extremely important for agricultural and horticultural practices in the valley. The Stone Age man has survived the harshest of the Pleistocene glaciations. The artifacts left by him are still entrenched in the deep soil horizons of the plateau lands. The choppers, hand axes, and sharp stone blades are worth mentioning, forming a storehouse of the Stone Age factory. These have great economic importance as this area is very appropriate for cultivation. We get very high-quality saffron from here, apples to are of unmatchable quality. It also helps in the cultivation of almond, walnut, apple, and orchards. Thus we need to preserve this geological treasure and legacy for the generations to come.