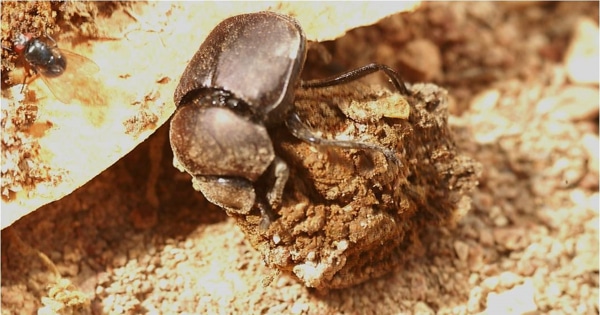 Dung beetles are feces-feeding bugs. Some dung beetles may bury 250 times their own weight in dung in a single night. Many dung beetles, known as rollers, roll dung into round balls that they use as food or breeding chambers. Others, referred to as tunnelers, bury the feces wherever they come across it. The dwellers, a third type, do not roll or burrow; they just live in dung. They are frequently drawn to the feces collected by burrowing owls. Dung beetle species come in a variety of colors and sizes, and some functional features, like as body mass (or biomass) and leg length, can vary greatly.

According to new research, nocturnal animals’ ability to travel by natural light in the night sky is hampered by city lights. They are instead compelled to orient themselves using streetlamps, neon lights, or floodlights.

We believe that light pollution can have a comparable effect on moths, compelling them to forgo their compass and fly towards the artificial light in order to have any signals to orient them by.

For the first time, researchers have demonstrated that city lights impair nocturnal animals’ ability to navigate by natural light in the night sky. Instead, they are compelled to orient themselves by using streetlamps, neon lights, or floodlights. The findings were published in Current Biology.

Some species, such as migrating birds, seals, and moths, use light from the moon, stars, and Milky Way to navigate at night. Researchers from Lund University in Sweden and the University of the Witwatersrand in South Africa have now demonstrated how nocturnal dung beetles are compelled to look for indications in their local surroundings when they can no longer navigate using natural light from the night sky.

“These beetles are forced to abandon their celestial compass and orient using artificial light instead,” says James Foster at the University of Würzburg in Germany, who led the study during his time at Lund University.

The Lund University team previously earned a lot of attention for their research on how dung beetles use the Milky Way to orient themselves as they roll their dung balls across the South African savannah. The current study looks into how light pollution impacts beetles’ capacity to orient themselves in the night sky using compass references.

The tests were conducted over several nights in two separate South African sites. The first was a light-polluted spot on a building’s roof in metropolitan Johannesburg, whereas the second was in rural Limpopo, where the stars illuminated an otherwise gloomy sky. The conclusion was clear: dung beetles were unable to use their celestial compass in the face of light pollution. Instead, they moved toward the streetlights, which lighted the buildings. Furthermore, multiple people frequently gravitated toward the same light source in the environment. Under normal conditions, these beetles spread in all directions, keeping clear of one another and avoiding confrontation.

“We believe that light pollution can have a comparable effect on moths, compelling them to forgo their compass and fly towards the artificial light in order to have any signals to orient themselves by,” explains Maria Dacke, professor of Functional zoology at Lund University.

According to the researchers, animals living on the fringes of cities are likely to be the most affected by light pollution since they have no stars or lighting to guide them. “In our experiments, we discovered how beetles exposed to direct light pollution acted abnormally but stayed orientated. Those who could only see the light-polluted night sky but no lit buildings or streetlights felt hopelessly lost “Foster comes to an end.