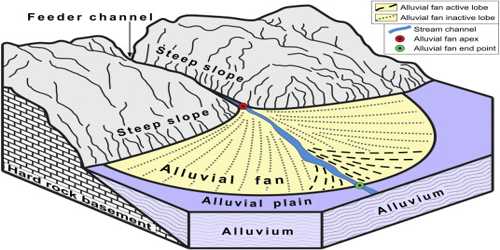 Alluvial fans are formed when water and sediments pass through a narrow gap between hills, mountains or canyon walls and then slows down and spread out when it reaches an open plain. Alluvial fans (Figure) are formed when streams flowing from higher levels break into foot slope plains of low gradient. Normally very coarse load is carried by streams flowing over mountain slopes. This load becomes too heavy for the streams to be carried over gentler gradients and gets dumped and spread as a broad low to the high cone-shaped deposit called an alluvial fan. Usually, the streams which flow over fans are not confined to their original channels for long and shift their position across the fan forming many channels called distributaries. Alluvial fans in humid areas show normally low cones with a gentle slope from head to toe and they appear as high cones with a steep slope in arid and semi-arid climates. 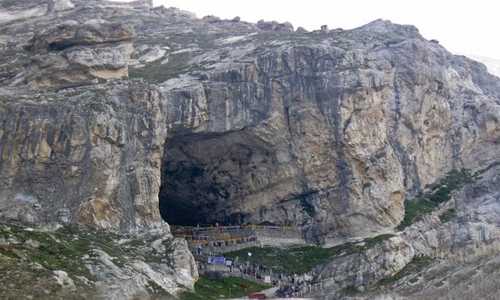 Figure: An alluvial fan deposited by a bill stream on the way to Amarnath, Jammu, and Kashmir