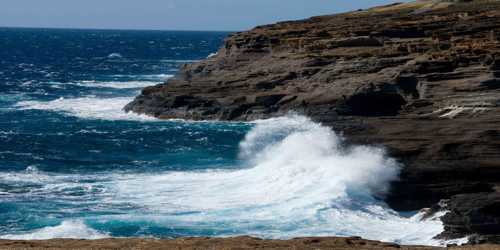 Along the high rocky coasts, the rivers appear to have been drowned with the highly irregular coastline. The coastline appears highly indented with an extension of water into the land where glacial valleys (fjords) are present. The hillsides drop off sharply into the water. Shores do not show any depositional landforms initially. Erosion features dominate.

Along high rocky coasts, waves break with great force against the land shaping the hillsides into cliffs. With constant pounding by waves, the cliffs recede leaving a wave-cut platform in front of the sea cliff. Waves gradually minimize the irregularities along the shore. 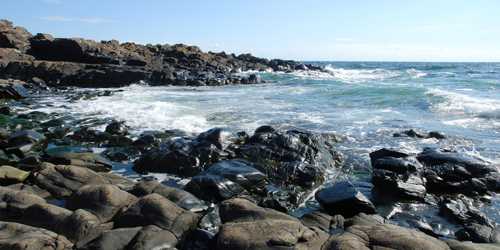 The materials which fall off, and removed from the sea cliffs, gradually break into smaller fragments and roll to roundness, will get deposited in the offshore. After a considerable period of cliff development and retreat when coastline turns somewhat smooth, with the addition of some more material to this deposit in the offshore, a wave-built terrace would develop in front of the wave-cut terrace.

Erosional Landforms due to Waves

As the erosion along the coast takes place a good supply material becomes available to longshore currents and waves to deposit them as beaches along the shore and as bars (long ridges of sand and/or shingle parallel to the coast) in the nearshore zone. Bars are submerged features and when bars show up above the water, they are called barrier bars. Barrier bar which gets keyed up to the headland of a bay is called a spit. When bather bars and spits form at the mouth of a bay and block it, a lagoon forms. The lagoons would gradually get filled up by sediments from the land giving rise to a coastal plain.