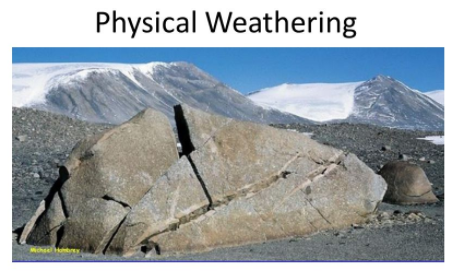 Physical or mechanical weathering processes depend on some applied forces. The applied forces could be- (i) gravitational forces such as overburden pressure, load and shearing stress; (ii) expansion forces due to temperature changes, crystal growth or animal activity; (iii) water pressures controlled by wetting and drying cycles. Many of these forces are applied both at the surface and within different earth materials leading to rock fracture. Most of the physical weathering processes are caused by thermal expansion and pressure release. These processes are small and slow but can cause great damage to the rocks because of continued fatigue the rocks suffer due to the repetition of contraction and expansion.

Removal of overlying rock load because of continued erosion causes vertical pressure release with the result that the upper layers of the rock expand producing disintegration of rock masses. Fractures will develop roughly parallel to the ground surface. In areas of the curved ground surface, arched fractures tend to produce massive sheets or exfoliation slabs of rock.

Various minerals in rocks possess their own limits of expansion and contraction. With the rise in temperature, every mineral expands and pushes against its neighbor and as the temperature falls, a corresponding contraction takes place.

Frost weathering occurs due to the growth of ice within pores and cracks of rocks during repeated cycles of freezing and melting. This process is most effective at high elevations in mid-latitudes where free-zing and melting is often repeated. Glacial areas are subject to frost wedging daily. In this process, the rate of freezing is important. Rapid freeing of water causes its sudden expansion and high pressure. The resulting expansion affects joints, cracks and small inter granular fractures to become wider and wider till the rock breaks apart.